Following the tragic poaching incident at Inverdoorn Private Game Reserve in December 2021, a crime that left 4 rhinos dead and a fifth pregnant cow badly injured, Aquila Collection owner, Searl Derman, was excited to make an announcement on 02 May. 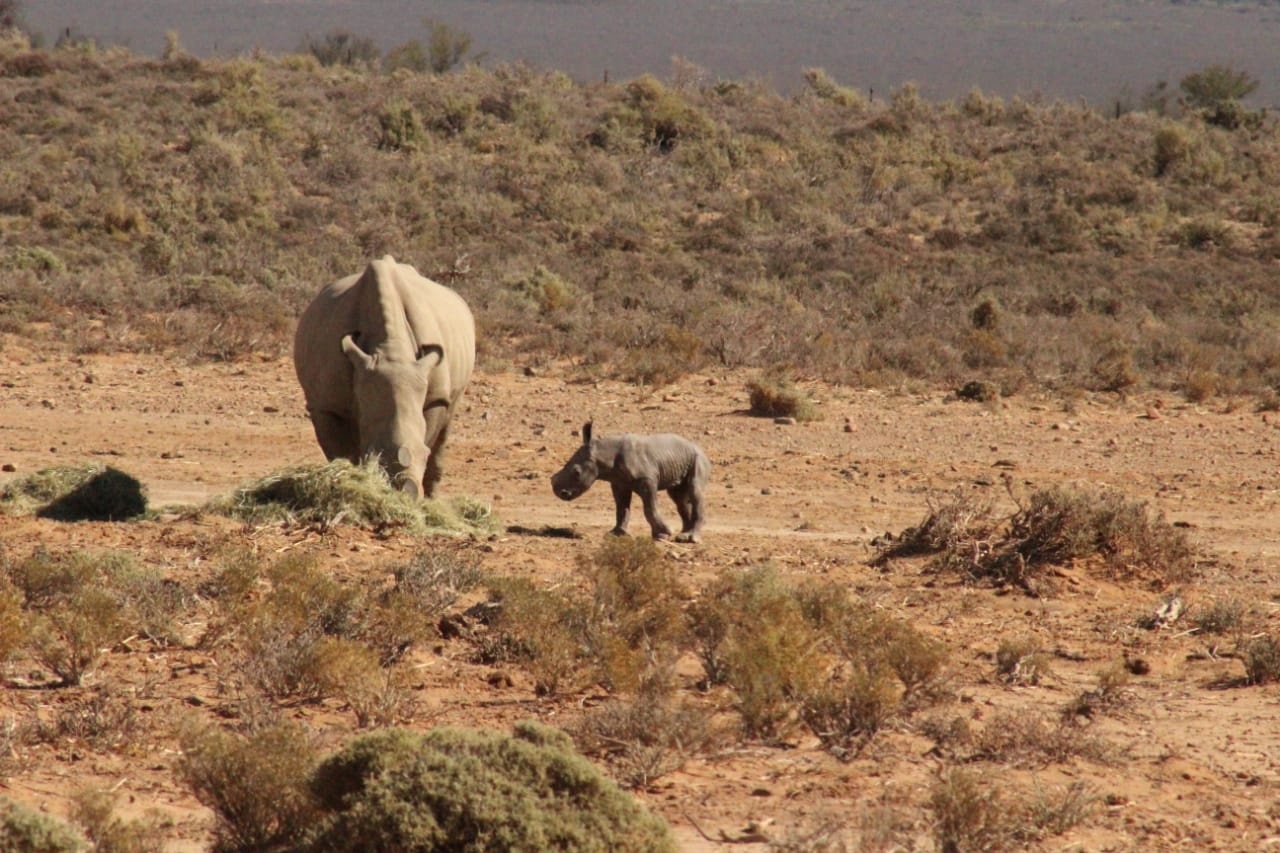 “I am elated to announce that, not only have arrests been made within days of the incident back in December, but the Inverdoorn poaching surviving rhino gave birth to a healthy baby rhino boy on 30 April.”

The Inverdoorn Anti-poaching team came across the horrific scene of rhino poaching on their 10000-hectare Western Cape private game reserve on 8 December 2021. The four dead rhinos had their horns brutally removed while an injured female rhino was missing and had to be tracked. A specialist team was immediately assembled to firstly find her, and then look after her safety while guiding her through recovery.

“Under the guidance and supervision of specialist and renowned veterinarian Douw Grobler, the injured female was constantly monitored, and finally stabilized enough to perform a series of reconstructive procedures to reassemble parts of her face that had been badly injured by a close-range high calibre rifle shot,” explained Derman.

He added: “During those first few days following the despicable crime, several arrests were also made by the SAPS (South African Police Service) supported by Cape Nature, and the private investigative teams that were deployed minutes after confirmation of the incident.”

In a miraculous turnaround of events, on Saturday 30 April, one of the Inverdoorn rangers, out on an early morning game drive, spotted a new-born white Rhinoceros struggling in an aardvark hole.

The anti-poaching team and management were immediately notified and the Aquila 24 Hour Rapid Rhino Response Team (a privately funded and managed unit that was established to locate, rescue and rehabilitate any orphaned rhinos from private game reserves throughout South Africa) was activated.

“The onsite team managed to pull the baby rhino free from the hole without any injury, and identified it as a baby male rhino calling for his mother,” said Derman.

Tears of joy from the management and reserve teams followed as they managed to reunite him with his mother who was then identified as the surviving rhino from the horrendous poaching incident that took place at Inverdoorn in December 2021.

“The judicial system is currently in control of the process to bring justice to the lost rhino lives, and we once again thank all the role-players and stakeholders that supported my teams and myself back in December 2021. The miraculous birth of this little boy is a joyous moment and celebrated throughout wildlife circles and the global rhino conservation community. Just a few short months ago, we were under immense pressure to save the mother’s life, now we see the miracle of an added life,” said Derman.

For the safety of the rhino, and the survival of the calf, the baby and mother will be monitored over the upcoming days by the 24-hour Rapid Rhino Response Team to ensure the baby and mother bond. Thereafter, guests visiting Inverdoorn Private Game Reserve just outside of Cape Town, might just have the bucket-list privilege to spot the mother and baby on a magnificent game drive experience.

It is estimated that approximately 10 000 African rhinos have been lost due to poaching over the last decade.

“This is a moment of hope in the preservation of these endangered species, and we are humbled and grateful for all the incredible support we have received since the news broke back in December 2021”, concluded Derman.

No expense was spared in the investigative processes as well as the survival of the rhino. All funds received by the generous donors to the multi-award winning and internationally recognised Saving Private Rhino organization is spent solely on the ongoing investigative costs and medical bills of the December 2021 incident, and the public may still pledge their support via SavingPrivateRhino.org or its Facebook page.

The rangers that captured the first images of the new baby at Inverdoorn said: “It is a momentous occasion and honour to have taken these images of new life after the tragedy on our private game reserve, and the occasion inspires us to continue our commitment to fight for the survival of Rhinos and all other endangered wildlife!”